From the outside, many houses of worship are white, yet the color of the building is no indicator of who worships within its walls. When I first visited the deconsecrated church on Rumsey Street, previously called St. Joseph the Worker, it triggered many feelings and memories, on the one hand of my childhood growing up in a Catholic family, and on the other of the recent terrorist attack on Emanuel AME Church in South Carolina. In the aftermath of the tragedy, a friend on Facebook posted a comment asking why there are no attacks on white churches. His question led me to ask, “What is a ‘white church?’” Rather than provide answers, I hoped to create a space that promotes questioning, blurring the differences between exterior and interior virtually using only the structure itself as material in order to activate the site. Stripes are a recurring theme in my photography and during my research into St. Joseph, I discovered that in the Middle Ages he was represented in visual art with stripes on his breeches in order to mark him as different, difficult, marginalized, but somehow significant. This fact made me want to put stripes on the abandoned building to create a visual pattern that evokes a restoration in progress. Instead of adding another layer of paint, I chose to uncover the original cedar boards by sanding away the white paint to reveal the building’s inner structure. The stripes continue as white lines painted inside the church, which seem to radiate from a cloudy apparition (caused by a water leak and repatched with cement) on the wall behind the former altar. Former concrete parking lot barriers painted gold become the new pews for viewers to sit on, and sawdust collected from sanding the cedar boards now resides in a glass urn – like ash remains. The work attempts not only to examine the literal structure of the church, but also by association, to consider the structure of whiteness and racism, while creating a living shrine with new icons that suggest something familiar and welcoming to those who previously attended this church. 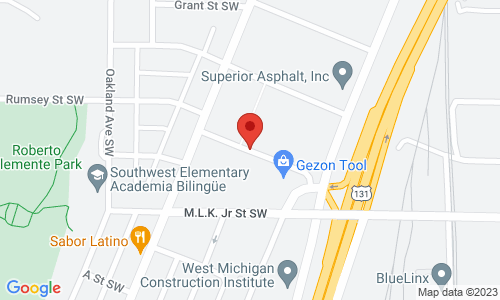